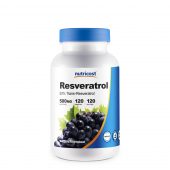 It’s no secret that as you age, your body begins to deteriorate and your risk of chronic disease increases. One lesser known piece of information, however, is that you aren’t completely helpless in this process. Many age-related diseases, such as diabetes, heart disease, cancer, and arthritis, are caused or accelerated by exposure to free radicals. Luckily, there are a number of powerful antioxidants that can neutralize free radicals and prevent them from aging your body. Astaxanthin, a compound found in microalgae, is hands down one of the most powerful antioxidants nature has to offer.

Often called the king of carotenoids, astaxanthin is an incredibly potent antioxidant – up to 100 times more powerful than beta-carotene – that can block UV rays, neutralize free radicals[1], and reduce risk of cancerous activity.[2] Astaxanthin reduces inflammation throughout the body, protecting the brain and joints from damage.[3] Astaxanthin can also negate the harmful effects of a high-fat diet[4] and improve lipid metabolism during exercise.[5]

There Are Currently No Customer Reviews For Astaxanthin

Write a Review on Astaxanthin   Comment or Ask a Question

As a dietary supplement, take 1 softgel daily with a fat-containing meal.

For adults only. Consult physician if pregnant/nursing, taking medication, or have a medical condition. Keep out of reach of children.

Natural Astaxanthin – Astaxanthin is a naturally occurring carotenoid, similar to beta-carotene and lycopene, that, due to its unique structure, performs an important role in cellular free radical protection. NOW Astaxanthin is derived from Haematococcus pluvialis microalgae, a premium source of powerful astaxanthin to protect against damaging free radicals.

Vitamin E – Vitamin E, also known as alpha-tocopherol, is an essential vitamin and powerful fat-soluble antioxidant that works alongside astaxanthin to fight against free radicals. Like astaxanthin, vitamin E donates its extra electrons to neutralize free radicals – preventing them from damaging cell walls and accelerating the aging process.

Q. How Does Astaxanthin Work?

A. Astaxanthin donates electrons to neutralize free radicals, and then releases the excess energy primarily as heat. Unlike other antioxidants that are depleted after they’ve transferred their free electrons, astaxanthin has a massive surplus, allowing it to remain active for longer. It helps to protect the heart, lungs, skeletal muscle, brain, neurons, and immune system from damage.

Q. Why Should I Take Astaxanthin?

A. As you go through the aging process and are exposed to free radicals on a daily basis, your heart, lungs, joints, and more are continually depleted, and your risk of chronic disease significantly increases. Astaxanthin is a powerful antioxidant whose consumption has been linked to better heart, skin, brain, and immune system health.

A. Astaxanthin is primarily a fat-soluble nutrient and antioxidant, meaning it needs to be consumed simultaneously with a fat source in order to be digested and absorbed adequately – otherwise it’ll pass through your system completely wasted. NOW Astaxanthin features healthy fat sources to take care of that for you and ensure maximum absorption.

Q. Does Astaxanthin Cause Any Negative Side Effects?

A. Potential toxicity is not a concern you have to be worried about with astaxanthin. Unlike other antioxidants, astaxanthin does not turn into a pro-oxidant, even at high structures. There have never been any reported negative side effects from astaxanthin usage. It’s only reported side effects have been positive and desirable.