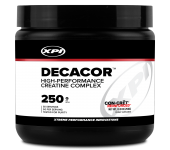 Universal Nutrition GH Stack is a creatine and anabolic supplement designed to promote optimum levels of GH, support healthy testosterone levels, and increase muscular growth. Creatine is a mixture of three amino acids found naturally in the body. Creatine provides immediate energy to muscle fibers, increasing endurance and strength. Growth hormone is a pituitary hormone that promotes and increases the synthesis of new protein tissue, including during recovery and repair.

Creatine increases the body’s ability to produce energy more rapidly, allowing you to train harder and more often with faster results. Studies have found that athletes who supplement with creatine are able to decrease ATP loss and increase total work production via an increase in ATP resynthesis.[1] As a result, ingestion of creatine leads to greater power and endurance under anaerobic conditions, greater muscular strength, and improved body composition.[2]

Mucuna Pruriens is a natural herb included in GH Stack for its high content of L-Dopa, the precursor to dopamine. Supplementing with mucuna pruriens increases levels of testosterone, luteinizing hormone, FSH, PRL, adrenaline, and noradrenaline, leading to higher energy levels and greater anabolic growth.[3] Griffonia simplicifolia is also included for its content of 5-HTP, a compound that increases growth hormone levels for advanced muscle building.[4]

With GH Stack, you will be able to increase levels of anabolic hormones and energize your body to get the most out of every workout and see incredible bodybuilding results.

GH Stack is a great product. It taste great and results were even better. It’s been only 3 weeks and I can totally tell the difference in my arms. Great for pre and post workout.

(2 of 5 found this review helpful)

GH Stack is a great product. It taste great and results were even better. It’s been only 3 weeks and I can totally tell the difference in my arms. Great for pre and post workout.

(2 of 5 found this review helpful)

Another great product from Universal Nutrition. Being an older bodybuilder,this product helps with strength,size, and energy.

(1 of 1 found this review helpful)

I take the product to stimulate GH production to promote general well-being. It tastes great mixed with a chocolate protein shake, and I feel great.

Write a Review on GH Stack   Comment or Ask a Question

Mix 2 teaspoons with 8 ounces of water. Swish GH Stack in your mouth for thirty seconds before swallowing. Avoid taking this product with foods that are high in fat or high in glycemic index carbs. As GH levels peak during deep sleep and in response to intense exercise, to maintain high levels throughout the day, take GH stack in the morning or afternoon for optimum results.

Not for use by individuals under the age of 18 years. Do not use if pregnant or nursing. Consult a physician before using this product.

Arginine – Arginine helps to stimulate the synthesis of proteins which will in turn build muscle. Arginine also helps to form creatine, which will provide extra energy and endurance for the body when working out. Arginine encourages the release of nitric oxide, which provides massive pumps for greater strength.

Lysine – Lysine is also known to cause the pituitary gland to release HGH. As we get older, our bodies naturally release less and less amounts of HGH. Lysine releases more HGH and allows one to feel younger than they really are. Lysine is an amino acid which will form proteins and muscles in a timely manner.

Glycine – A study was conducted showing that Glycine helps to raise levels of HGH in the body. Glycine helps to build muscle and prevent the breakdown of muscle. Glycine is also a main component of collagen, the connective tissue to forms ligaments and skin.

Glutamine – Glutamine is another amino acid that helps to build up muscle and prevent its breakdown. It is also of great benefit to the immune system and makes more efficient use of glycogen storage. Glutamine also has a direct effect on HGH; in the presence of high glutamine levels, the pituitary gland will secrete higher levels of HGH.

Mucuna Pruriens Extract – Mucuna pruriens is a tropical legume known as velvet bean. Mucuna Pruriens contains L-DOPA, a precursor to the neurotransmitter dopamine and is sometimes used as a coffee substitute.

Q. What Time of Day Should I Use GH Stack?

A. HGH levels peak while you sleep and as a result of intense exercise. You can help keep your HGH levels high all day by taking GH Stack in the morning or in the afternoon when you are not working out.

Q. How Do I Use GH Stack for Best Results?

A. Mix 2 teaspoons of GH Stack with 8 ounces of water. Swish GH Stack in your mouth for 30 seconds before swallowing. When using GH Stack, avoid eating any foods that are high in fat or high in glycemic index carbs.

Q. Who Can Benefit from GH Stack?

A. GH Stack was designed for the serious athlete or bodybuilder who wants to maximize results in and out of the gym. By naturally increasing HGH levels within your body, GH Stack can help you achieve greater muscle and strength gains by increasing protein synthesis and decreasing protein breakdown within muscles.

Q. What Are The Warnings?

A. Do not take more than the recommended dose as serious consequences could occur. Do not take when consuming a high fat or a high sugar meal. Ask your doctor for more information. GH Stack is not meant to be used by anyone under the age of 18.

A. No. GH Stack uses only natural ingredients. GH Stack does not contain any HGH, synthetic or otherwise. Instead, GH Stack utilizes a natural formula to stimulate the increased production of your own HGH.